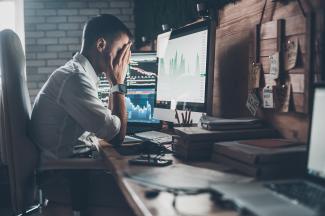 Keeping Your Emotions In Check

REMINDER: Past performance is not a predictor of future returns. Nothing contained herein shall be construed as the rendering of personalized investment advice or providing our opinion as to the merits of a particular investment or strategy. We also have no idea as to future performance for any asset class over any future time period; if we did, investing would be a lot easier!

If one were to wait until the coast is clear before investing, he or she would never commit capital to any investment. Risk, however you choose to define it, is omnipresent. We often write about various individual stocks suffering major declines to reinforce (a) why diversification among stocks (and asset classes) is critical and (b) even when the stock market is doing well, there are plenty of stocks which have depreciated considerably in value. We know first-hand it is not easy to be an investor and experience losses. Unfortunately, it is impossible to avoid losses all of the time if one wants to grow his or her capital. As noted by investor Barry Ritholtz recently in an article titled, “Why You Should Stick With ‘Buy and Hold,’ “If you cannot live through a 25% pullback in the value of your portfolio, you have no business owning stocks.” Particularly when losses come fast and furious, as they have recently, we tend to think the sky is falling and there is no light at the end of the tunnel. As famed investor Benjamin Graham surmised, “The investor’s chief problem – and even his worst enemy – is likely himself.”

For every argument in favor of a particular investment or asset class, there is seemingly an equally plausible counter argument, if not many. As an example, this past week’s stock market drop, with the major averages/indices falling between (4.5%) and (5.0%) (representing the worst start to December since 2008), actually followed the S&P 500’s best week in seven years. November was a positive performance among the major stock market indices after a horrific October. Also, the yield curve has experienced a considerable narrowing in its slope, to the point where there was an inversion of the 3 versus 5-year U.S. Treasury last week (meaning the yield on 3-year Treasuries exceeded that of 5-years). As noted in the 12/10/18 issue of Barrons, in 6 of 7 instances when this occurred the (a) median distance to a recession was 25 months (so over 2 years) and (b) the S&P 500 Index went on to earn a median 20% over the following 24 months. At least with stocks we know we have partial ownership of an entity and its assets, cash flows, operations, etc. Pity the investor who jumped aboard the cryptocurrency train for fear of missing out, only to endure bitcoin’s whopping (80%) decline in value (86% from its January, 2018 peak), including a (37%) fall in December alone!

As you know, we have no idea what the stock market’s performance will be tomorrow, next week, the following month, year or years. Neither does anyone else for that matter. We do know that the longer one’s investment time horizon, the more likely they will achieve positive returns by investing in the stock market. And with ever increasing life expectancies resulting in longer retirements to fund, combined with the effects of inflation and financial inadequacy of countless government programs as presently constructed, it is important to include and remain committed to stocks as part of one’s portfolio. Yet, stocks do not go up in a straight line. As noted by value investor Chris Davis, on average we should expect a 5% correction every 51 trading days and a 20% correction (or bear market) every 630 trading days. Currently, We’ve gone over 2,400 days without a (20%) decline – although we’ve had two (10%) declines from peak to trough in 2018. According to Jeremy Siegel, Wharton Professor, the average daily change in the stock market over the past 100 years is 2/3 of 1%. As contained in the attached page courtesy of State Street Global Advisors from mid-November, 2018, (a) the S&P 500 Index fell about (10%) in October (with mid and small-cap indices fairing even worse), (b) the average market correction during mid-term Presidential election years is actually considerably worse [an (18%)] fall and (c) historically, the S&P 500 Index was up an average of 31% the subsequent 12 months after such a correction – never having finished in the red during this time (encompassing 14 different occasions since 1962). Sam Stovall, Chief Investment Strategist at CFRA, noted that from 1946 – 2014, the S&P 500 Index average price return 12 months after the mid-term election (from 10/31 thru 10/31 of the subsequent year) averaged 14.5% - with positive returns in all 18 years. We are certainly not stating this will come to fruition over the coming year (particularly in light of the Federal Reserve’s quantitative tightening as compared with its easy monetary policy from 2008 – 2016); however, it is useful to put market declines into proper historical context. Especially considering that, since 1900, the median bull market has lasted roughly two times as long as the median bear market (35 months versus 18 months), and with a more than 2:1 upside/downside ratio (+53% for the median bull market versus -25% for the median bear market).

Recently, there has been nowhere to run and nowhere to hide, so to speak, with respect to the investing environment. For example:

Much of the stock market’s moves are based upon expectations and whether or not actual results exceed or lag such expectations. Unfortunately, no one has a crystal ball to accurately predict the future. Additionally, a great company is not necessarily a great stock; a strong economy does not necessarily mean there will be a strong stock market; and so forth. We did find of interest commentary from a few managers we follow (all aside from Chris Davis manage mutual funds we currently utilize) from November or December – so their commentary takes into account October’s correction.

When the stock market declines by a large %, particularly over a short period of time, it is useful to remind yourself of a few things:

As always, please do not hesitate to contact us if you’d care to review anything contained herein or otherwise. We wish you and your family a joyous Holiday season, terrific end to 2018 and (gulp) Happy 2019!

IRS CIRCULAR DISCLOSURE
To ensure compliance with requirements imposed bythe IRS, we inform you that any U.S. tax advice contained in this communication (including any attachments)is not intended or written to be used, and cannot be used for the purpose of (i) avoiding penalties under the InternalRevenue Code or (ii) promoting, marketing or recommendingto another party any transaction or matter addressed herein.