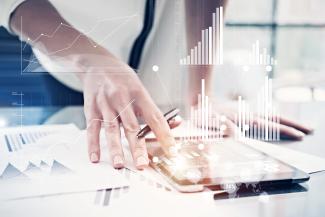 REMINDER: Past performance is not a predictor of future returns. Nothing contained herein shall be construed as the rendering of personalized investment advice or providing our opinion as to the merits of a particular investment or strategy. We also have no idea as to future performance for any asset class over any future time period; if we did, investing would be a lot easier!

Investing is unique in that it is one of those endeavors that can cause a tidal wave shift in emotions seemingly at the drop of a hat. We’re enduring such a phase presently after the stock market’s precipitous decline this week – following positive performance during the first ¾ of the year and in the aggregate since the middle of 2009. All indices stock market indices were down more than (5%) cumulatively the past two days – with the S&P 500 Index (representing 70% of the total U.S. stock market) having fallen by (3.3%) and (2.1%), respectively. Every S&P 500 sector was in the red during this time – from energy (down 6.6%) to utilities (down 2.5%). Technology stocks, which have largely driven the gains of the stock market during the first nine months, fell over (9%) for the month of October thru the 11th – encompassing just 9 trading days. Alas, as per the attached illustration of investor emotions from DFA Funds, two weeks ago many were either in the optimistic or elated camp and, at a whim, these individuals are now in the nervous and/or fearful camp. It is remarkable that, as of yesterday’s close, over 75% of the S&P 500 Index was either in correction territory (216 stocks down 10% or more from a previous high) or bear market territory (165 stocks down 20% or more from a prior high).

There are a host of reasons purported for why this sharp pullback has taken place. For example, October is a scary month – with major crashes in 1928, 1987 and 2008 (down nearly 22% 10 years ago), respectively. Would it surprise you, then, to know that October has actually been the strongest month of the year from 1997 – 2017, with the S&P 500 Index up 2.1% on average during this time? Furthermore, during mid-term election years, dating back to 1950, October has also been the strongest performing month and, in fact, has only been down once since 1982 in midterm years. Not only is the 4th quarter historically the strongest for the stock market (since 1988 the S&P 500 Index has earned an average of 5.3% in Q4), but in a mid-term election year it has risen an average of nearly 8% since 1950. The above is courtesy of an October 1, 2018 article on cnbc.com entitled, “History suggests the S&P 500 is about to begin its strongest stretch of the year.”

We’ve written ad-nauseum about the inability of investors to successfully and consistently time the market as a plan for achieving attractive long-term (and risk-adjusted) returns. As contained in the enclosed page from Hartford Funds entitled, “Timing the market is impossible,” an investor in the S&P 500 Index who generated a 7.2% rate of return over the 20-year period (240 months) saw their return completely wiped out if they missed the 20 best months – or just 8.33% of the best months over this time. Additionally, during the 10-year period from 2008 – 2017, the S&P 500 Index’s total return was 126% - yet less than ½ of 1% of the trading days (merely 10) were responsible for 79% of the index’s return! It’s truly staggering how so few of the market’s trading days represent such a large percentage of its returns over time. Likewise, the following enclosed J.P. Morgan chart, entitled “Annual returns and intra-year declines” displays an average intra-year decline for the S&P 500 Index, from 1980 – 2017, of nearly (14%). During this time, the market rose over 3 out of every 4 years. As merely one example, an investor had to withstand a (28%) intra-year decline in 2009 in order to earn a 23% return for that year – a 51% spread that would have required extreme patience, discipline and restraint.

It is important is that your investment plans not be overhauled by the performance of asset classes over a few days’ time. If the stock market fell by (5%) for a given year, we’d say it was a bad year – but we would likely not be panicked over this. However, the stock market declining by (5%) in a day or a few days or a week’s time we view very differently from an emotional perspective. There must be something wrong – so we need to get out. During greedy or fearful times (which unfortunately often exists when investing in the stock market), it is always best to review history and facts because their validity is considerably greater than opinions – no matter how reasonable or rational sounding. To that end, attached is the following:

How wonderful it would be, for our wealth and health, if we could cherry pick the best investments! Merely to use Amazon as an example, given its tremendous performance and the fact that everyone has heard of them and so many people utilize their services, last May The Wall Street Journal profiled their 20th year being public in an article entitled, “Amazon’s IPO at 20: That Amazing Return You Didn’t Earn.” Of note, their stock price experienced:

Do you know anyone who was, or would be, able to withstand, and hold onto their shares, given the above? Neither do I.

Whenever you hear how well certain individual stocks are performing, and lamenting the fact you don’t own them or don’t own enough of them, remain cognizant of the fact there are usually countless more stocks going through their own downturn – such as:

The purpose of diversification is to attempt to avoid the big hit – as most investors can’t tolerate losses such as the above during just one trading day.

As we conclude our latest missive, The Dow Jones Industrial Average today was up as high as around 400 points (in the AM), as low as down (70) points (in the PM), only to close up 287 points and 1.15% (the Dow Jones Total Stock Market Index was up 1.29% - although the Russell 2000 Index of small-cap stocks was barely in the black). Such seemingly random, yet large fluctuations, remind us of the last Presidential election, when at 1:00AM the Dow Jones Industrial Average was pointing to an opening the following day of (1,200) points at the prospect of Donald Trump becoming President. The level of panic was all consuming. Yet, later that day, when The Dow finished higher by triple digits, the narrative somehow shifted full circle with diametrically opposite verbiage from what we had heard merely the night before (even from some of the same market pundits and commentators)!

Stocks are extremely risk investments – yet these risk factors are what historically have provided a premium relative to other asset classes. With (a) inflation a fact of life (often exceeding any wage increases); (b) longer life expectancies requiring more years to fund and (c) large potential costs such as medical, educational and the like (along with countless other living expenses), stocks represent an important (albeit not the only) asset class to enable us to achieve our future goals and objectives. Focus on what you can control – such as asset allocation, diversification, avoiding market timing, etc. – while not allowing large swings in the stock market, either up or down, to result in your abandoning your investment plan. Periodic/regular rebalancing as applicable is one thing; shifting with the winds based upon what’s doing well (or not) on any given day is not.

All the best to you and yours.

IRS CIRCULAR DISCLOSURE
To ensure compliance with requirements imposed bythe IRS, we inform you that any U.S. tax advice contained in this communication (including any attachments)is not intended or written to be used, and cannot be used for the purpose of (i) avoiding penalties under the InternalRevenue Code or (ii) promoting, marketing or recommendingto another party any transaction or matter addressed herein.